Waun Mawn – is this the site of the Original Bluestone Circle?

a) How to find the site

The Waun Mawn sites are accessed from the B4229 Eglwyswrw to Haverfordwest road, along a gated farm track by the cattle grid at Tafarn y Bwlch ( Lat 51*58′; Long 4* 47′). During the recent Documentary The Lost Circle Revealed, shown on February 12th we saw evidence that supports the old folk legend that an original bluestone stone circle was once taken from the Preseli Hills of West Wales to Stonehenge. I would like to suggest some comments that may be useful in assessing this evidence and clearing up some unfortunate confusions that appear to have been made in the presentation of the material.

During the week following the documentary I  received and answered over 90 emails , and one of the main issues raised by these correspondences was a confusion as to just which of the involved stones formed the Waun Mawn referred to during the documentary. The OS map shows three separate areas where standing stones are marked. Below, I have included photographs of all three sites. The OS Map allocates this ‘title’ to the higher reaches of the prominent hill Cnwc y Hydd, yet there are extensive peat bogs down to the lower levels, and mawn means ‘peat’ in Welsh.

a) The Two Leaning Stones

Walking along the pathway to Gernos fach farm from the small parking area next to the cattle grid at Tafarn y Bwlch, the first two stones are found to the left of the gated track, around 300m from the large gate. These are small, less than three feet high, and very much an aligned pair, each sloping at the same angle to the west and about six feet apart. 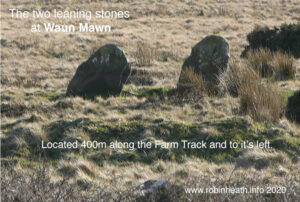 b) The Solitary Waun Mawn Stone

This is without doubt the largest stone on the moor and it stands, with considerable presence, some sixty yards from the right hand side of the trackway some 500 yards from the entrance farm-gate. The side by side photographs show the difference in size between this whopper and the much smaller standing stone within the claimed bluestone circle. 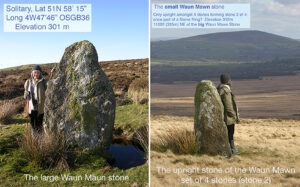 Th larger stone forms the southern point of a large geodetic structure,  a diamond shape aligned to the cardinal points of the compass (N-S-E-W). Revealed through surveying in 2009 it was found to suggest a vesica piscis construction, with Pentre Ifan on the East, the Neolithic burial chamber near the summit of Carningli (West) and the weird and spectacularly sited second ‘motte’ at Nevern Castle (North).  This largest upright stone is the Waun Mawn I refer to in my book Bluestone Magic, a Guide to the Prehistoric Monuments of West Wales (available from website online book-shop and elsewhere).

b) The Remains of a Stone Circle?

To get to the third set of stones requires that one takes a right just after passing through the gate, and follows the track up are around to the right for about 400m, taking a left turn and walking uphill to a fairly level plateau where there are four clearly identified stones that appear to have once been originally set along a curve. The first stone (going left to right) is recumbent, about eight feet long, the second is the sole upright stone, of pleasing symmetry and remaining fully upright. This stone is frequently referred to by earth mysteries folk, dowsers and ley hunters, cited as being a highly energetic stone that can cause ‘tingling’ when held or touched.  The third is another recumbent stone, and similar in size to stone one. The fourth stone is much smaller than the rest. 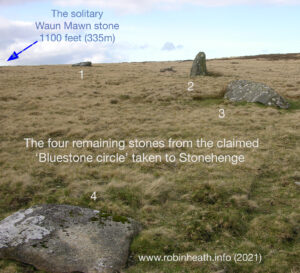 If you visit this claimed stone circle and the weather is good, I cannot recommend highly enough the value of walking on up to the summit of Cnwc y Hydd, where there are some very special perspectives on the Preselis and beyond to enjoy from the summit.

I hope this clears up the matter of which Waun Mawn stones are which. Slightly misquoting the late archaeologist Jacquetta Hawkes I now hope you will all ‘get the Waun Mawn stones you deserve!‘

Since the Lost Circle documentary, and as we are enjoying the first dry sunny days since over three months of fairly wet, windy and impossible surveying weather conditions, I decided it would be fun to check the measures, geometry and astronomy now being offered by Mike Parker Pearson’s team during that recent TV documentary, who were suggesting a diameter of 361 feet (110 metres), a circle almost identical with the size of the outer bank at Stonehenge. This does not wholly agree with my own measurements, taken too many years ago, but the Preselis is a big patch for just one person to get around.  In due course I will report back. Watch this landscape!

Organised by VIP Wales and with Robin Heath as Tour Guide

Like the previous course , this course is based around the Cnapan Hotel and Restaurant in Newport, Pembs.

However, there are also several places for local people or those that would prefer to take an alternative option – bring a camper van or caravan, tent or book into a YHA Hostel.

For more details – visit the VIP website at info@vipwales.co.uk

VIP Wales have put together a course to run on the above dates and have asked me to provide them a suggested itinerary. Enclosed below, in modular form, this tour provides alternatives in the event of poor weather. At this stage it is preliminary but gives a good indication of the extent and content of the Tour’s intent.