Getting Wise about the Royal Mile

The continuing media news story concerns itself with the late Queen’s recent passing and the decision to transport Her Majesty’s coffin from Balmoral to Edinburgh, in order that the coffin can lie in state in St Giles’ Cathedral, on the Royal Mile, and thence to Buckingham Palace and finally Westminster Palace prior to  internment at Windsor on Mondy 22nd February 2022.  There has been no explanation or understanding of the greater significance of all of this action, although one BBC correspondent was heard to say “Edinburgh Castle is a mile or so from Holyrood Palace, along the Royal Mile”. Grr!

These two Royal monuments are not ‘about a mile or so apart‘ at all, and this display of metrological ignorance highlights the awful fact that most moderns have never been told or have forgotten something very important about our legacy from ancient times. In a country that perhaps overstresses its historical roots, we appear to have lost contact with the sources of own remarkable and very ancient origins. Interested.. Read on!

The Royal Mile, in Edinburgh, is 8/7ths of our traditional mile in length, a route signed today and known as the Royal Mile to present-day Scots. It is a narrow straight cobbled road that connects the centres of two Royal Palaces, Holyrood and Edinburgh Castle Palace.

Holyrood derives from Holy rod, a single measure that was once known throughout the territory of Alba, Scotland’s ancient name. This unit  once formed the basis for surveying and defining a known and universally accepted standard within a system of weights and measures, lengths, areas and volumes. The Egyptian Royal cubit is intimately connected to the Royal mile, being 8/7 Imperial or English feet in length.   My late friend Vivian Linacre, the Scot who founded the British Weights and Measures Association, once said that “only when a nation has a system of weights and measures, can it be said to have become civilised“.

The Royal Mile forms part of a prehistoric system of measures, and is not merely a road sign for a narrow straight track connecting two major royal sites. The Royal mile is a length, not a street name, that once determined where these two monuments were to be located on the landscape above Edinburgh, appropriately under Arthur’s Seat, and the towering Salisbury Crags, also near to St Andrew’s well.

All ‘Royal’ units of length are a seventh part larger than the common unit of the same name. Thus, the Royal Mile is 8/7ths of the value of the English mile, which is 1.142857 English miles or, expressed as feet, a similarly awkward 6034.285714 feet.

All ‘Royal’ units of measurement therefore have seven in the denominator – the lower line of their fractional structure – and all are related through simple fractional ratios. Fractional sevens are awkward (irrational) when decimalised, in comparison to 8/7, which numerically speaking, is a piece of cake.

BTW: Mainly for the more metrologically interested] : So, compared to other known ancient and even prehistoric measures, the Royal Egyptian foot is 8/7 of the English foot, and 7/6 of the ‘common’ Egyptian foot, 10/9 of the ‘common’ Greek foot and 25/24 of the Sumerian foot, finally, it is 48/49 of the Russian foot. One prehistoric measure is worthy of note – the Astronomical megalithic yard (AMY)is a length found incorporated within the structures of many megalithic monuments. There are 2222.2222 of these units in a Royal Mile, which is surely an odd coincidence, doubly so as the actual funeral of Queen Elizabeth II has just been set to commence at 2:22pm on the 22nd February!

These low number fractions demonstrate that a widespread and integrated system of weights and measures pre-existed in Europe long before King Malcolm and his like became King of Alba (Scotland) in the 10th century. Malcolm I seemingly inherited the already sacred sites that have since become the Castle, Cathedral and Royal Palaces, most recently the site of the new Scottish Parliament, all built along the ‘Royal Mile’, whose beginning is the Concentric circular pattern to the rear of Holyrood Palace, and ends at the centre of the Royal Palace at Edinburgh Castle.

The length of the line connecting these two points at 8/7ths of an English mile in length, is truly a Royal Mile, and it passes parallel to the southern wall of Holyrood Palace, then though the centre of the new Scottish Parliament Building, along the Royal Mile to the Edinburgh Museum, the crossroads that lead to to Waverly station and the University of Edinburgh, directly over the Mercat Cross, over the spire of St Giles’ Cathedral, over The Scottish Whisky Experience, before terminating at the centre of the Royal Palace, within Edinburgh Castle. From St Giles’ Cathedral to the Royal Palace is exactly one third of an English mile (1760 ft)

The death of Elizabeth II and the subsequent pageantry that firmly reveals the deep roots of a strong, current, yet very ancient  ‘Scottish Connection’, is worthy of much further discussion in our media, and in the content of a more balanced history curriculum in our schools. For, unless we understand something of this legacy of our distant past it will not be possible to understand our modern world, and the decisions and often crazy outcomes that emerge from within our National and Devolved Parliaments. This has little to do with politics, much more a balanced education.

The Royal Landscape of Britain

It may come as a shock to suddenly be faced with the fact that Britain contains a very ancient network of landscape geometries that reflect and that these are related to an original prehistoric culture of high status and civilised rulership. This originates from way back in time, when the ruling Monarch was taken to have direct access to God, the original creative force. This system remains today and has survived into our times, the modern representatives on earth for God being the Pope, the Dalai Lama and, closer to home, in our Constitutional Monarchy, our beloved and recently deceased Queen Elizabeth II and the newly acceded Head of State, Charles III. The origins of all this are hidden from us, we have forgotten them, yet the monumental structures, prehistoric or medieval, are telling us a much bigger story

The ancient landscape described above is not at all hidden, it lies across the British landscape in plain sight, and yet it would appear that our modern culture has more or less completely forgotten all about it, and it is entirely absent from our educational curriculums.

Although it is termed a symbolic orsacred landscape, it has objective and scientific roots, involving precision surveying and a system of measures based on the size of the earth, and it displays a knowledge of the key rhythms and cycles of the sun, moon and earth system.  The original prehistoric system combined Astronomy, Geometry and Metrology, and was first named megalithic science, by professor Alexander Thom, (Oxford), a Scot who in the late 60’s became known as the leading pioneer of archaeoastronomy.

Perhaps the biggest shock of all is that the three capital cities of the UK mainland, London, Edinburgh and Cardiff define the corners of a huge right angled triangle. In each case, the corner of the triangle is right on or very close to the Royal palace and/or  Castles. 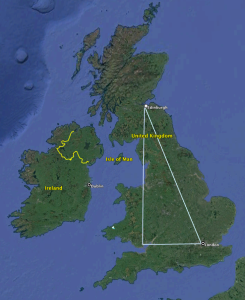 This is no ordinary triangle, for its side lengths fall into the ratios of five to twelve to thirteen, this shape familiar to geometers and termed the second Pythagorean (right-angled) triangle, or simply, “a 5:12:13”. It is no accidental or coincidental triangle either, having its roots, as a symbol of life on earth, going well back into prehistoric times.

The lines that draw out the triangle, and whose lengths can be accurately measured, remain invisible, but this does not alter the fact that the 5:12:13 triangular arrangement between our three capital cities is a tangible reality. It can easily be traced from the monuments placed on or adjacent to visible lines on a map that indicate the path of these invisible lines.

The lines that connect the three capital points named above mark out or highlight the locations of all manner of high status and historical buildings, some very ancient and some not so ancient (a very relevant and topical example is that the Cardiff – Westminster line passes through Windsor Castle). Can this be seen as being a coincidence, more relevantly, one must ask how did this come about and why has this fact apparently remained unknown, unpublished until the geometry of this triangle resurfaced in 2004? [Powerpoints, Heath, 2005]. At this time, the much troubled construction site that has since become the new Scottish Parliament building was being erected right on the ine near Holyrood palace

Surely it is a sign of an current and presently active geometrical knowledge and deliberate placement of our Royal cities and centres of Government over much more ancient sacred sites. These cultural activities date back to prehistoric times.

To confirm this, it will help if you have access to a computer with Google Earth. The side lengths in miles are, Edinburgh – Holyrood Palace to Cardiff Castle mound, 309.1 miles, bearing 180.8 degrees; Cardiff to Westminster Abbey, 131.1 miles, bearing 88.3 degrees; the line passes through Windsor Castle.Westminster Abbey – Holyrood, 332.2 miles, bearing 339.2 degrees. The triangle’s perimeter is 772.4 miles. Considering that the Earth surface is curved, the accuracy of this this huge triangle can be considered as a materwork, the more so if one accepts that its roots lie in prehistoric times.

What was the Original Chosen Dimension ?

A curious person is going to ask when was it conceived, how was it surveyed to find the three sites that defined this arrangement of our leading cities, and then mark the spot with humungous monumental power structures? What were the units of length used to measure out the required distances that separate Cardiff : Edinbugh : London?

There are choices of units that could reasonably vie for having been applied. The best candidate amongst these is what is today known as the Megalithic Yard, which should have been called a Megalithic step, a metrological step being 2.5 times the foot being employed, in this the Drusian foot of 15/14 the the value of the English or Imperial foot. (The system of ancient metrology was all related by simple fractions, you see!)

This article reveals something of the deep continuity and seemingly timeless structure that underpins our culture, as we mourn our late Queen’s passing. The discover the more esoteric meaning of the 5:12:13 triangle, the reader may need to peruse this and other websites that deal with the relationships that exist between the cycles of the sun, moon & earth.

Finally, it seems reasonable to suggest that Cardiff becoming the new capital city of Wales only in the 1950s may indicate that people in high office still do know all about this ancient traditional wisdom? Perhaps we can now begin to find out.

Author of PowerPoints –Secret Rulers and Hidden Forces in the Landscape.