Getting Wise about the Royal Mile

The continuing media news story concerns itself with the late Queen’s recent passing and the decision to transport Her Majesty’s coffin from Balmoral to Edinburgh, in order that the coffin can lie in state in St Giles’ Cathedral, on the Royal Mile, and thence to Buckingham Palace and finally Westminster Palace prior to  internment at Windsor on Mondy 22nd February 2022.  There has been no explanation or understanding of the greater significance of all of this action, although one BBC correspondent was heard to say “Edinburgh Castle is a mile or so from Holyrood Palace, along the Royal Mile”. Grr!

These two Royal monuments are not ‘about a mile or so apart‘ at all, and this display of metrological ignorance highlights the awful fact that most moderns have never been told or have forgotten something very important about our legacy from ancient times. In a country that perhaps overstresses its historical roots, we appear to have lost contact with the sources of own remarkable and very ancient origins. Interested.. Read on!

END_OF_DOCUMENT_TOKEN_TO_BE_REPLACED 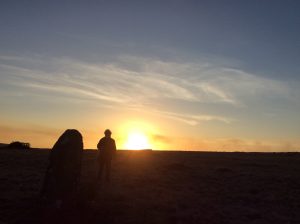 END_OF_DOCUMENT_TOKEN_TO_BE_REPLACED

The recent legal halting to the original plans for a tunnel to cut under the Stonehenge landscape may have slowed down one process of degrading the archaeological value of the monument’s extensive landscape, but it’s a temporary pause, and plans are again back underway.

This massive road works within the landscape of Stonehenge is not the only degradation threat that is going on at England’s ‘National Temple’. In this post I want to point out another threat to our understanding of this monument, one which increasingly restricts the future interpretation of the design of the monument, what it was for, and what it represented.

Drayton’s poem, Polyolbion, concerns the fate of those who located and placed the stones at Stonehenge, and well sums up the subject of this article,

“Ill did those mighty men to trust thee with their story;  Thou hast forgot their names who reared thee for their glory.”

END_OF_DOCUMENT_TOKEN_TO_BE_REPLACED

Waun Mawn – is this the site of the Original Bluestone Circle?

a) How to find the site

The Waun Mawn sites are accessed from the B4229 Eglwyswrw to Haverfordwest road, along a gated farm track by the cattle grid at Tafarn y Bwlch ( Lat 51*58′; Long 4* 47′). During the recent Documentary The Lost Circle Revealed, shown on February 12th we saw evidence that supports the old folk legend that an original bluestone stone circle was once taken from the Preseli Hills of West Wales to Stonehenge. I would like to suggest some comments that may be useful in assessing this evidence and clearing up some unfortunate confusions that appear to have been made in the presentation of the material.

During the week following the documentary I  received and answered over 90 emails , and one of the main issues raised by these correspondences was a confusion as to just which of the involved stones formed the Waun Mawn referred to during the documentary. The OS map shows three separate areas where standing stones are marked. Below, I have included photographs of all three sites. The OS Map allocates this ‘title’ to the higher reaches of the prominent hill Cnwc y Hydd, yet there are extensive peat bogs down to the lower levels, and mawn means ‘peat’ in Welsh.

END_OF_DOCUMENT_TOKEN_TO_BE_REPLACED

The recent passing of Dr Euan MacKie, together with the earlier passing (in April) of Dr Aubrey Burl,  and that of professor Keith Critchlow, brings to an end those stalwarts who were part of the surge of interest, during the 1960s and 70s, in archaeoastronomy, earth mysteries and a general quest to connect to our ancestors, to better understand the ancient world so as to include the new data that was pouring in from the work of those three professors, Gerald Hawkins, Alexander Thom, Fred Hoyle and those such as John Michell, whose lot it was to become part of, if not found, an alternative way of exploring  our ancient and prehistoric past, often tabbed  ‘the lunatic fringe’  within archaeological circles. 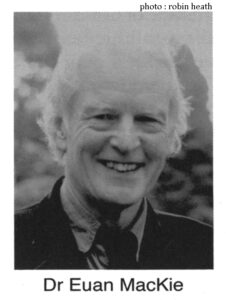 END_OF_DOCUMENT_TOKEN_TO_BE_REPLACED

Durrington Walls Pit Ring is by far the largest known example of a megalithic egg, when compared with other existing types of ‘egg’, such as Woodhenge (Type II, Thom, 1967), just south of Durrington;  Allen Water, near Hawick,(Type I, Thom, 1967 ); and Castell Mawr henge in Pembrokeshire (Type III, Heath, 1916), adjacent to the ‘bluestone’ outcrops of Preseli, in West Wales. Other surviving examples of ‘Type III’ eggs, which have semi-elliptical ‘blunt’ ends, include Hirnant cairn circle in Montgomeryshire (Type III Hoyle, 1977), and Glasserton Mains rock art, on the Machan peninsula, Dumfries and Galloway (Morris and Bailey, 1967).

In Part One, the map of the pits around Durrington Walls was shown to clearly define the known geometry of a circular ended Type II egg, based on the locations of the many pits that make up the ‘pit ring’ discovery at Durrington. This geometry was compared with that of Castell Mawr.

Part Two shifts the focus to a metrological analysis of the shape of this pit ring, exploring its apparent properties and the relationship between Stonehenge and Durrington Walls pit ring ,  whose centre is located at a distance of just under 2 miles to the north-east of Stonehenge.

A New Circle around Stonehenge.

Stonehenge displays some similar qualities to the pit ring in that both monuments have identifiable centres and both have connections with megalithic constructions beyond their enclosing ‘walls’or ditch and bank, which extend out into the wider landscape. My earlier posts on Woodhenge provide a good example of such an extension to Stonehenge. Both monuments are also redolent with geometrical and metrological information, the kind of evidence that I routinely work with.

The investigation here identifies and quantifies these similarities, and  concludes by identifying a possible further large circle, concentric to, but set well beyond the present boundaries of Stonehenge’s bluestone, sarsen and Aubrey circles, and analysis will suggest a highly significant underlying purpose for such a circle’s existence.

END_OF_DOCUMENT_TOKEN_TO_BE_REPLACED 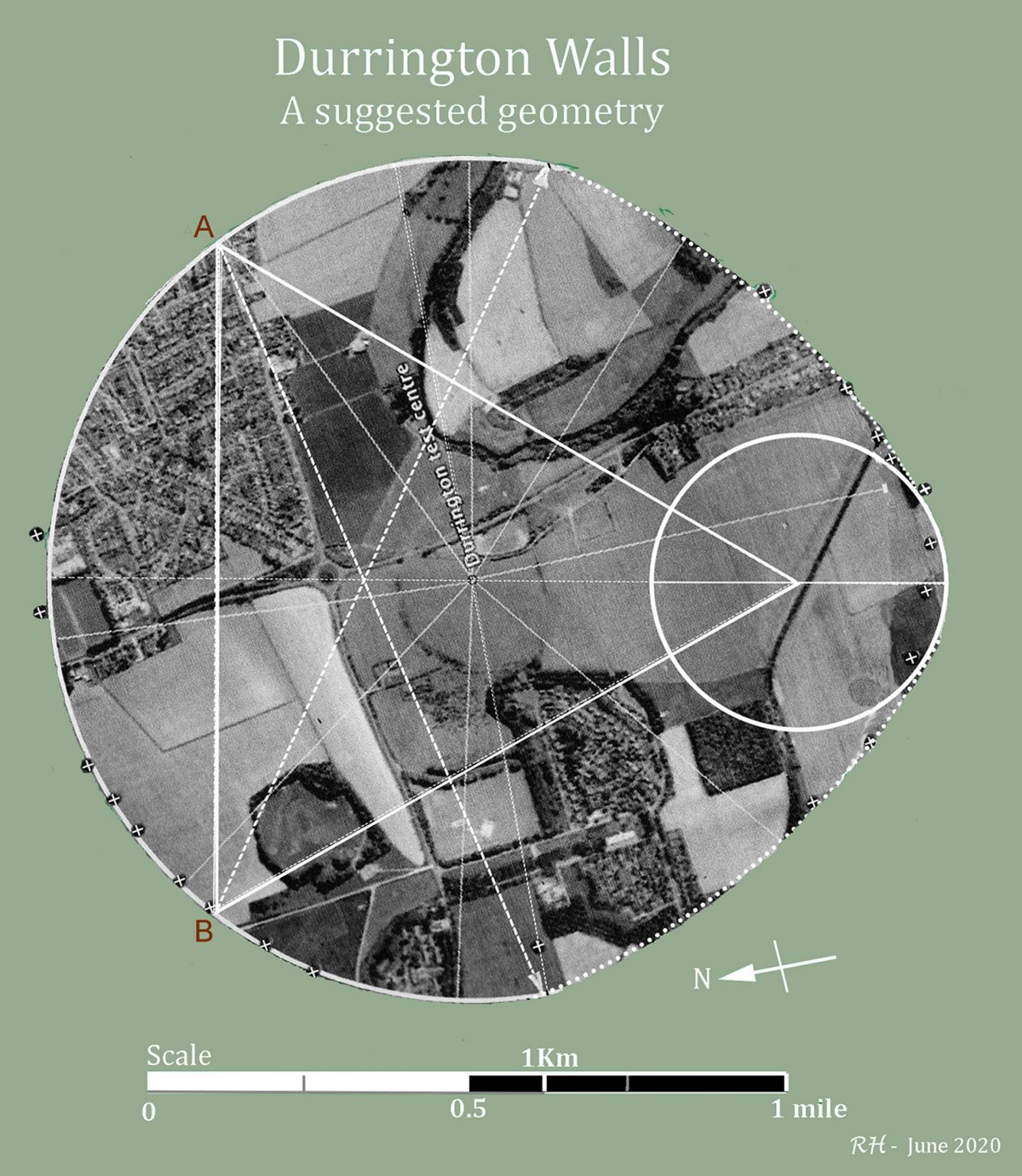 Part One:  Joining up the Dots

For pandemic reasons, the 2020 summer solstice sunrise gathering at Stonehenge was cancelled . The awesome sight of the rising sun over the Heel stone in line with the monument’s axis and the ‘avenue’ was replaced by an important discovery: A  huge ring of very deep and very wide pits had been discovered in the chalky subsoil around Durrington Walls, just two miles northeast of Stonehenge and a little north of Woodhenge.

The discovery of these pits is of great significance, and came in the form of a report of an on-going investigation report, the result of years of work by large team of archaeologists from many universities, and other specialists.

Due to the site’s proximity to Stonehenge – which is just under three miles to the southwest of Durrington Walls, the PR guys clearly thought it a good time to announce the launch at the summer solstice. The Guardian clearly thought so, coming on strong with this catchy title,

END_OF_DOCUMENT_TOKEN_TO_BE_REPLACED

Designer and collator Thomas Melrose has done what has been needed for many years – produced a superb graphical map of Avebury where all the stones are listed, all the recent archaeological evidence derived from LIDAR and aerial photography is included and, where applicable, shown on the plan. For the tourist or visitor it now becomes the must-have source material to have tucked away in a rucksack or large pocket during a walk around the Avebury Henge site.

But this new presentational format goes far further than this necessary accessory. Its accuracy is without doubt the best yet available to researchers, be they academic archaeologists or enthusiastic amateurs.

END_OF_DOCUMENT_TOKEN_TO_BE_REPLACED 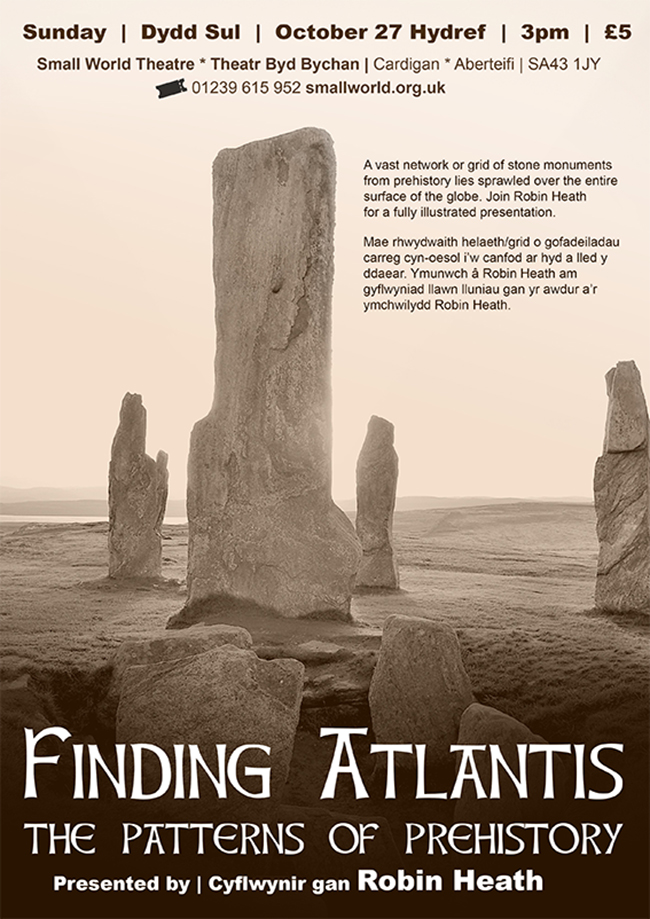 A fully illustrated presentation beginning at 3pm GMT on Sunday, October 27 2019, at Small World Theatre, Cardigan. Robin Heath will be discussing his latest research which answers some of the trickier questions that get asked about the abilities of early prehistoric cultures. Includes Q&A session. Poster gives main details, here’s some more to whet your appetite…

Into Earth Mysteries? Ancient Landscapes? Alignments? Ley-Lines? (what are they, then?) megalithic and other prehistoric and ancient monuments? Atlantis – where was (is) it to be found and what was Plato’s myth all about?
Here’s an afternoon of time travel…going back in time and looking seriously at human origins as the clocks also go back in time . Booking recommended.

A Newly Revealed Temple at Avebury

The Avebury henge site was very nearly lost to us. We owe its existence to Alexander Keiller, the ‘Marmalade Millionaire’ who, during the 1930s, poured his family inheritance into restoring the site. Before Keiller, there were only eight original stones left standing at Avebury.

Avebury henge in the snow. The Henge Shop is at the centre, the Church just to its left.

During the early eighteenth century, the inhabitants of Avebury village became engaged in the wholesale toppling of Avebury’s huge stones and their subsequent reduction to building stone. If that great antiquarian and chronicler William Stukely had not publicly intervened, all of Avebury’s stones would have been removed and the site totally destroyed. A single generation would have demolished Avebury.

‘And this stupendous fabric, which for some thousands of years, had brav’d the continual assaults of weather, and by the nature of it, when left to itself, like the pyramids of Egypt, would have lasted as long as the globe, hath fallen a sacrifice to the wretched ignorance and avarice of a little village unluckily plac’d within it.’  END_OF_DOCUMENT_TOKEN_TO_BE_REPLACED