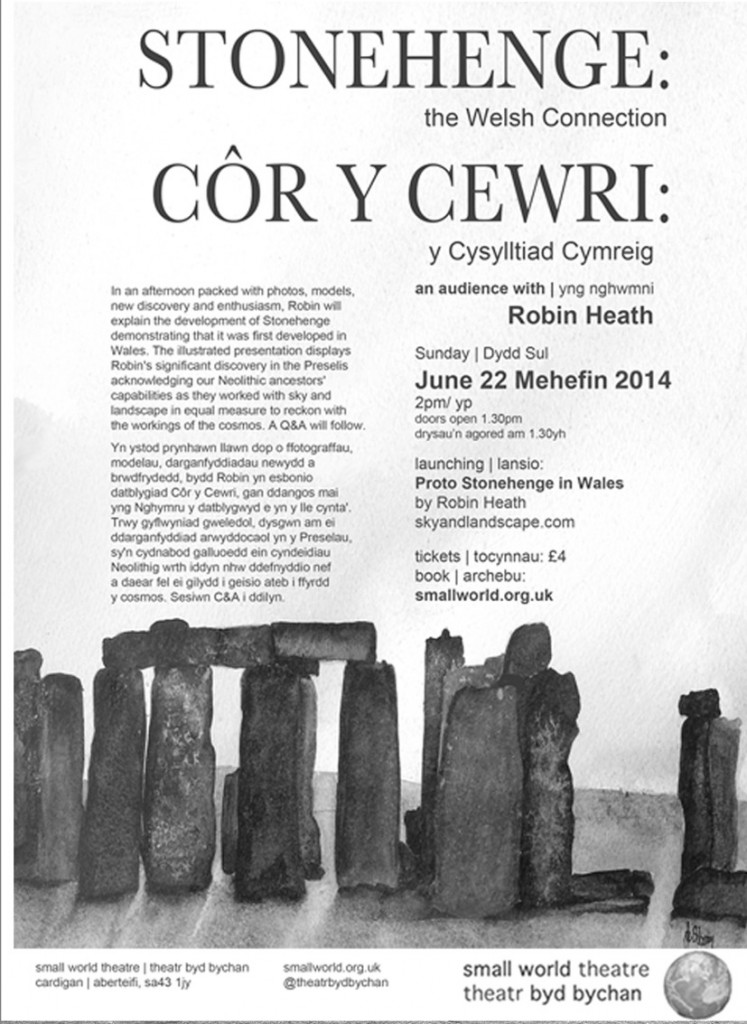 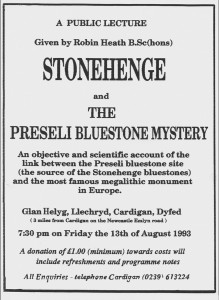 It appears you can get away with almost anything in contemporary archaeology. One can for once agree with Jacquetta Hawkes who reckoned that ‘Every generation gets the Stonehenge it deserves’. In this generation one may gain permission to dig the hallowed turf of Stonehenge itself provided you have a theory that is zeitgeisty enough to woo the public. But does it hold water?

I am, of course, talkin’ ‘bout my gg..g..g.eneration of archaeologists, the Geoffrey Wainwright Experience, with Geoffrey himself on Mediaphone, accompanied by Tim Darvill on Vibes. Their opening track? “Cutting the First Sods for 50 Years at Stonehenge”

Compared with anything that has gone before in recent Stonehenge history, this ‘New Improved’ theory of why the bluestones were so important to the builders of Britain’s National Temple must appear as pure affrontery to ‘the lunatic fringe of dotty archaeology’, who have always thought that, free from the dogma that lurks in academic disciplines, they had sole rights to investigate whatever questions they liked on archaeological matters. In an apparent surge of ‘if you can’t beat them, join them’ mainstream archaeology now boldly appears to be straying into traditional loony fringe territory. We must welcome them – they may be healed by the process. The media love it, of course, fawning all over the two heroes of this piece of Stonehenge ‘science’. It is the perfect media story. Stonehenge sells – and is thus like a magnet to the media. Everyone knows about Stonehenge (except they don’t really know very much about it at all), it’s a World Heritage Site and it attracts nearly a million visitors a year who all come, pay their £5, and then learn very little about it. Despite all this brouhaha, the monument retains its title as one of the best solstice detectors in the known world.

The Heath Brother’s second survey report on Le Manio, in March 2010, has resulted in the first decent plan for the ‘Quadrilateral’ monument. From this comes valuable evidence suggesting the origin and length of the megalithic yard, showing it to result naturally from ‘day-inch’ counting of sun and moon cycles.
Were the archaeology profession ever to rekindle interest in why these massive monuments were built, this report would provide a major platform in providing sensible answers. For any study of the History of Science, this paper is a must-have bombshell, revealing unsuspected astronomical, geometrical and metrological skills from the prehistoric culture of Europe, prior to 4000 BC. [July 2011, PDF, 19 pages, 4.1 MB, free download]
CLICK HERE for The origin of the megalithic yard. [This is a large file. Allow time to download.]
ALSO:
FULL SURVEY REPORT OF LE MANIO March 2010
As a result of encouraging feedback and interest in the results from the Heath Bros recent survey of le Manio, the original survey data is now available as a PDF file, free, gratis and for nothing on the S&L website.

This report began innocently enough as a diversion during our Spring 2010 survey (also available on this website). We noticed half a dozen symmetrical stones standing proud from the footpath near theQuadrilatere, at Le Manio. Arranged in a regular arc these stones were recorded and measured. This led to new and significant evidence of lunar astronomy having been practiced at this remarkable and virtually unknown site near Carnac, Brittany.

The peaceful death of Hamish Miller at his home near St Ives, Cornwall, prompted an enormous and appreciative response. The Parallel Community, which Hamish recently helped to found, enjoyed over 47,000 messages on its website, a warranted response to a man who had given so much to both the alternative and earth mysteries movement. Hamish was well loved.

Hamish was always a Scot, but he was not always involved in alternative ideas. He spent his childhood near Stirling and attended Heriot Watt University in Edinburgh, where he graduated in engineering. After a career in this discipline, eventually owning his own company, he underwent a near-death experience (NDE) while under the surgeon’s knife, and this totally redirected his attentions to other matters that were to occupy the final thirty years of his life. He moved to a 12 acre smallholding near Trencrom, a short distance from Hayle and St Ives, where he set up a fully equipped blacksmith’s workshop/studio. He quickly made himself a local name as a fine and most useful craftsman, this leading to later acclaim as a sculptor in metal. Commissions followed and his garden was dotted with graceful and humorous examples of his work.

It was in Cornwall, living under the powerful peak of Trencrom that Hamish first began to become interested in dowsing. He rapidly became very proficient indeed in this art, and in the late 80s, Hamish got together with another adopted Cornishman, the writer and historian Paul Broadhurst, and together they mounted one of the largest earth mysteries projects ever undertaken at the time. Travelling the length of what has since become known as the St Michael line – the longest line that can be drawn across southern Britain – they dowsed all the sites along it. Today the ‘Michael line’ is known to many people, at the time hardly anyone knew of it.

The Michael line passes through or adjacent to many of the prime sites in southern Britain and this includes many important megalithic sites such as Boscawen-un, the Hurlers and Avebury, as well as scores of churches named after the Saint, many perched on high tors and lower tumps, such as Glastonbury Abbey and Tor, Bury St Edmunds Abbey and Cathedral, Brentor and Burrow Mump.

This lengthy quest resulted in the publication of the best selling earth mysteries book of all time, The Sun and the Serpent, in the late 1980s. Building on work undertaken previously by his contemporary, John Michell, this book radically and practically approached the study of the interaction between Man and Landscape, and formed a precursor to the phenomenology movement in academic archaeology.

For landscape work it may be useful to understand the following:

1. The most commonly met error in landscape work is an assumption that the blue grid squares on an OS map align to the cardinal points of the compass. They do not. Drawing up North-South or East-West lines on Ordnance Survey maps requires that you refer to the longitude printed around the top and bottom edges of the map, (for East-West lines the latitude on the right and left edges) from which North-South and East-West lines may then accurately be drawn onto the map.
Large scale maps emphasize this distortion to the level where most people think that Liverpool or Cardiff lie West of Edinburgh. They do not.

2. There is no substitute for visiting the site. Landscape work must eventually move from mapwork to the landscape itself. Why? Because modern OS maps take liberties with where they mark the location of sites. Secondly, when at the site, a GPS reading will
establish the latitude and longitude (and altitude above mean sea level) often to within 20 feet, which is much better than can be achieved easily from maps.

3. OS grid references refer to an area square and not to a single point. Therefore it is better to set up the GPS to read degrees, minutes and decimal fractions of a degree. Set the internal set-up of the GPS to OSGB, to correlate OS maps to the GPS’s readings. With the display reading DD MM.DDD resolution down to 15 feet accuracy of a location is obtained. DD.MM.SS only resolves to a second, which is about 100 feet.

Always record the elevation of a site. This often takes a few minutes to settle down on a GPS, but it makes issues with intervisibility between sites much easier to resolve if you recorded the elevation of each site and you are back at home 100 miles away!
.
4. If you use Google Earth, the indicated latitude and longitude will be slightly different from those on an OS map, and you will need to convert from WGS84 (Google’s) to OGB36 (OS). The website www.nearby.org.uk does this (and will also convert a grid reference to lat/long, with OSGB being displayed below the WGS84 reading). Google Earth is useful for indicating distances between sites although not always as accurately as do GPS readings taken on site.

5. Determining direction. The magnetic compass is best regarded only as a very rough guide to estimate direction in this type of work. The geology of Wales and Cornwall varies the compass reading, sometimes even reversing it! Much better is to use a GPS. To measure angles from a site, walk and peg a line of constant longitude (north-south) or latitude (east-west). Fix a cloth tape between the pegs, which realistically needs to be longer than a hundred feet. Use a large protractor to estimate other angles, for example to a prominent site on a distant horizon.

6. A theodolite is the ultimate tool for determining angles! Save the pennies and buy a secondhand one that does not invert the image.