Thunderbirds are go! I have recently been invited to give a presentation on my work in the Preseli Hills at the first of the above events.

This first event is being held at the Memorial Hall in Newport, Pembs, which is located on the right as one leaves the village travelling on the A487 towards Fishguard. Please note that parking can be the devil’s own business there, so the Carpark down the hill may be a wise decision, travelling towards Fishguard, and before you get to the Memorial Hall, it’s on the left at the main crossroads in the town, and just a short walk gets you to the hall.

I am informed that fizzy drinks and canapes are going to be available, and I’m told by Paul Sanday, a geologist and the organiser of the event, also one of the speakers, that he wants to “get things moving on the debate about Stonehenge’s connections with the bluestone sites within the Preselis”. I wonder how much stirring of these dark and well muddied waters might he be looking for!? Usual photos, storyline and new research from me, plus question time and jolly books for sale with some humour. Could be a lot of fun.

The second event is hosted by the long standing,  successfully managed and well informed West Wales Dowsers, associated with the BSD. The venue is Bronydd Village Hall, about two or three miles from Carmarthen on the main Newcastle Emlyn road to Cardigan. The post code is SA33 6BE for all you non-dowsers. And for those who eschew the sat-nav, one turns at the sign for the steam railway,  following the road past the station, then, after about a quarter mile the village hall is on the left. The clue is that it looks just like a village hall, and is sited opposite Timberman and before the charming bridge over the river. Huge free carpark.

Doors open at 1:45 for a 2pm start. I’ll be presenting lots of stuff about my research, and my latest book, Temple in the Hills, plus a Q&A session, and you’ll also get the chance to mingle and chat with loads of nice folks into all manner of interesting aspects of the earth mystery genre. The secretary is Jennifer Forrest. Certainly better than watching an old black and white ‘B’ movie on the telly! All done by 4:30pm, in time for everyone to get home for Countryfile.

Here is a tarted up version of the first geodetic survey around Pentre Ifan and Carningli, in spring 2009. This first saw the light of cyberspace on the skyandlandscape (SL) website. The survey was undertaken with a Wild T16 theodolite, pegs, GPS device and tapes, and it revealed a complex isometric (equal lengths) megalithic structure across the eastern flank of Carningli mountain. The corner ‘points’ of two back-to back equilateral triangles were each marked with significant and large well known prehistoric monuments.

Read on! The PDF is free to go for students, megalithomaniacs, and even archaeologists (for non-commercial use only and the source must be credited). The whole story of this survey is told in a fully illustrated colour book Bluestone Magic – a Guide to the Megalithic Monuments of West Wales, available from this website (see books section for details as to how this book can be rapidly be found landing on your doormat). 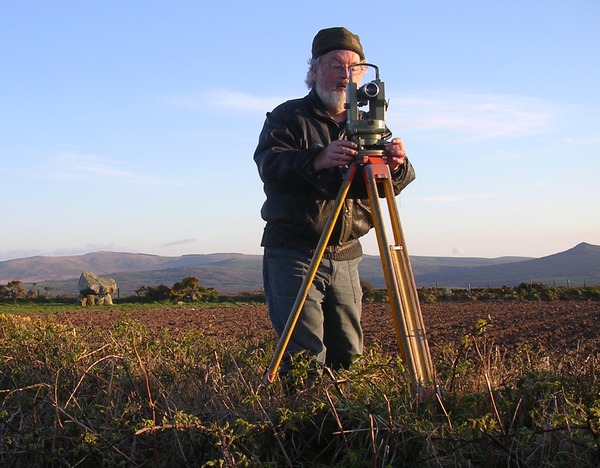 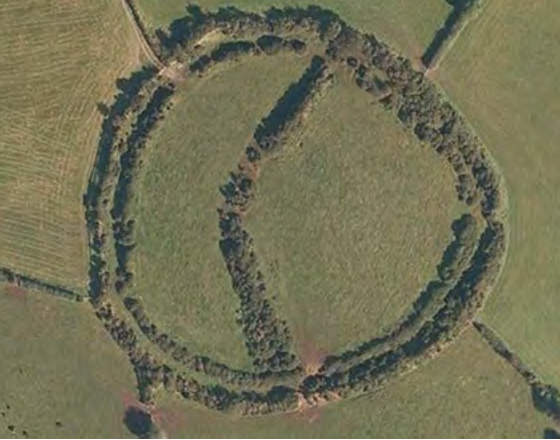 Hello Robin,
I thoroughly enjoyed Temple in the Hills, and many others will enjoy it also. Your excellent surveys are really the key to convincing archaeologists of the broad scope of ancient science and knowledge. I have attached a short review and do firmly believe that we should encourage students to follow your footsteps in metrological surveys so that more people may convince themselves of these essential sciences.

Best Regards and Thank you again for your inspirational book!

TKD
Thomas Karl Dietrich is the author of Temple of Heaven & Earth, Culture of Astronomy, and Origin of Culture. websites: cosmomyth.com and donohoememorials.com

Here is his review:

TEMPLE IN THE HILLS, The Discovery of the Original Stonehenge by Robin Heath

The introduction to Temple in the Hills by Robin Heath traces olden traditions and modern movements concerning the bluestone circle at Stonehenge, Zodiac hunters, New Age celebrities such as John Michell and Alexander Thom. The main corpus is dedicated to a review of astronomical phenomena and especially Heath’s discovery of the ‘Lunation Triangle’ within the context of ’the 30-segment, marked rope & peg’ configuration producing the 5-12-13 triangle which numerically defines the Moon’s relationship with Sun and Earth. Heath also gives a basic primer upon how to construct an accurate Equilateral Triangle on the landscape; again by simple rope & peg implements, showing that detailed, large-scale surveys may be achieved with very simple tools –proving that complex constructs were well within the abilities of our Stone-Age ancestors.

Robin Heath brings a solid case of evidence in favor of Neolithic metrology into the courtroom of archaeology. The evidence turns upon his measurements and discovery of ‘the Preseli Wheel’, centered upon the 500 foot diameter henge at Castell Mawr. Heath delineates five spokes of this wheel: Llech Drybedd, Carningli Summit, Foel Feddan, Carn Menyn, and Foel Drygarn which each average 18,630 feet (3.52 miles) upon the Preseli circle. The evidence of this wonderful precision is an indictment of modern archaeology’s continuing neglect to embrace and acknowledge metrological data and refined astronomical alignments. Heath returns to one of his 2010 investigations of his survey of the Preseli Vesica showing the distances between five locations upon a diamond pattern of two base-to-base equilateral triangles. The length of the common base and the sides of these two equilateral triangles show a nearly equal length and a mean distance of 11,759.0 feet demonstrating; in the author’s own words, “An accuracy that showed it to be a surveyed structure.”

Heath’s detailed demonstration of these irrefutable similar dimensions at the Preseli Wheel and Preseli Vesica represents no small contribution to science –because every well-documented opus elevates and substantiates the case for large-scale Neolithic metrology, precision alignments, as well as the broad based canons and traditions involving cycles, numbers, and geometry. It is absolutely important to celebrate this achievement for what it has and will accomplish. But, rather than bemoan the slow acceptance of new scientific data, I am quite sure that colleges and universities would take up such an interesting project for their students to gain valuable expertise in metrology; namely, to confirm Robin Heath’s survey measurements. This would once and for all guarantee the acceptance of accurate large-scale metrology in the Neolithic period and ignite a fire under the dragging feet and torsos of the archaeologists.

In his conclusion, Robin Heath presents the initial stages of his paramount discovery that the Aubrey Circle and the Sarsen Circle of Stonehenge bear the same relationship to one another as do the Preseli Wheel and its central circle around Pentre Ifan and Eglwyswrw. This correspondence shows that Stonehenge was based upon the template of the Preseli Wheel in Wales dated between 3200-3800 BC. Heath notices that genetic biologists conclude that the brain capacity of humankind has been more or less the same for almost 200,000 years.    TKD

To purchase a copy of this book, full details are found in this category (Books) of the website.

Bluestone Press was founded in 1993. All our titles are locally printed by Gomer Press, perhaps the best known publisher/printer in Wales. Our titles are traditionally designed books, printed onto high quality paper and sewn covers, and bound into soft back format. They last, and some. In addition to books by Robin Heath, Bluestone Press has also published specialist astronomy and astrology textbooks, audio books, soli-lunar calendars and leaflets on musical instrument restoration and megalithic site tour guides, in addition to postcards and gift cards.

Once payment has been made it is often possible to dispatch books within 24 hours. We like to know that they have been received safely, and we need to know if books have arrived damaged during transit.

There are substantial discounts for multiple book orders, for larger quantities and trade, please note that our distributors are all happy people.

All Bluestone Press titles (marked above in bold and asterix) are available by post, as a soft cover edition.

To order a book from this list, we will need the following information, by email or snail-mail :

Once payment has been made it is often possible to dispatch books within 24 hours. We like to know that they have been received safely, and we need to know if books have arrived damaged during transit.

There are substantial discounts for multiple book orders, for larger quantities and trade, please note that our distributors are all happy people.